These Graduates are The Future of Fashion 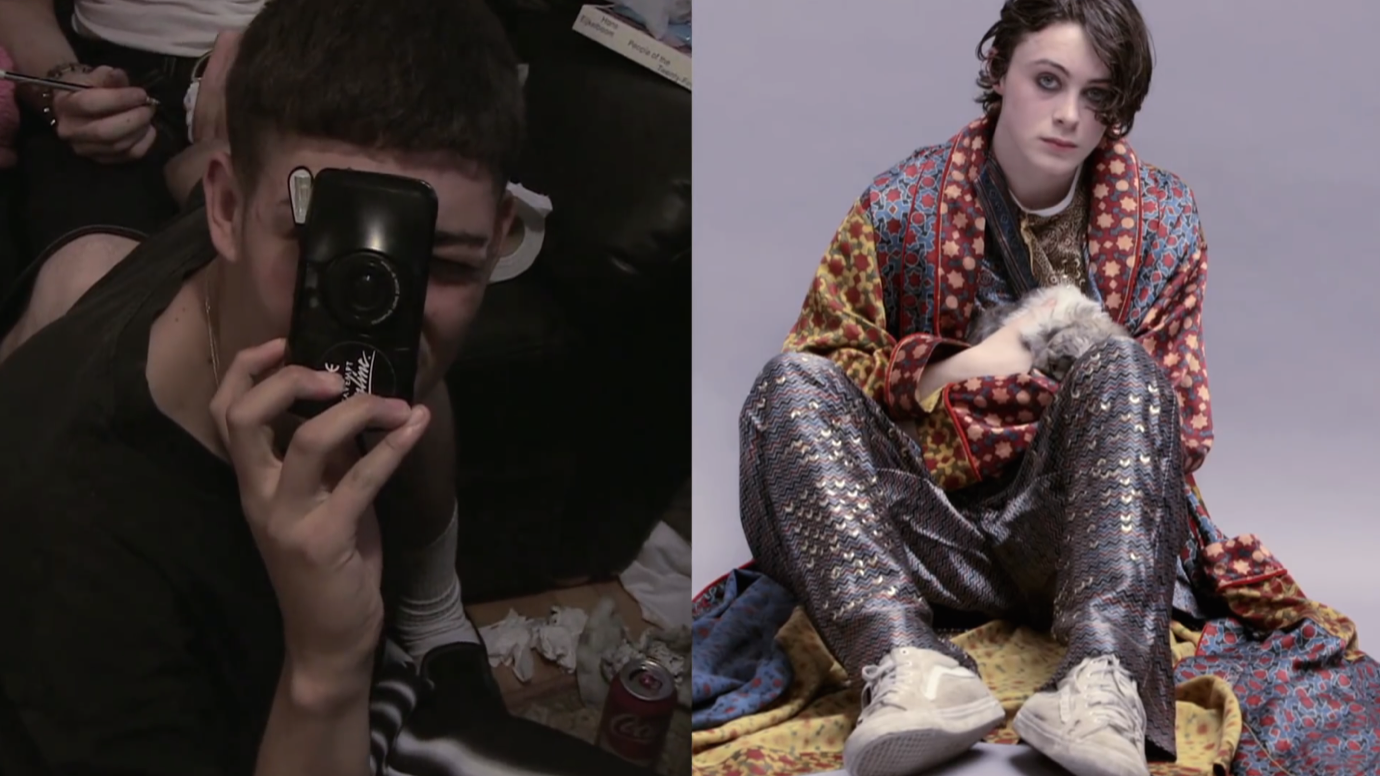 It’s not often that three big platforms which support young talent decide to join forces and collaborate in a cross-cultural manner. SHOWstudio, MACHINE-A and JOYCE Hong Kongrecently gave 8 Chinese and British fashion design graduates a stage: Grace Wales Bonner, Adam Marc James, Chris O Carroll, and Kiko Kostandinov designed and sold a capsule collection for London-based MACHINE-A, and Ximon Lee, Kay Kwok, Xiao Li, and Kenneth Yeung created unique garments for Hong Kong-based JOYCE. To celebrate the partnership and to sell the garments internationally to those unable to shop in-store, Nick Knight stepped in and shot a video, YUNGSTERS, together with filmmaker Rei Nadal for showstudio.com, styled by AnOther Man’s Fashion Editor Ellie Grace Cumming. We spoke about youth with three of the masterminds behind the collaboration.

“EDUCATION AND RETAIL HAVE NEVER BEEN BROUGHT TOGETHER LIKE THIS. I THINK IT IS FASCINATING.” – NICK KNIGHT

Could you please tell us about your collaboration with SHOWStudio?

Stavros Karelis (MACHINE-A): With SHOWstudio, we have a long lasting relationship working on so many creative projects, and I personally have a huge admiration and respect for Nick Knight, who is the founder of SHOWStudio, and of course a brilliant photographer. Nick has a genuine passion for supporting emerging talent in the creative industry and fashion in general, and this is what brought us together. We partnered officially to launch www.shop.showstudio.com, and when the project of JOYCE came along, SHOWstudio created beautiful creative content to support the graduates in its own unique way.

Why did you decide to collaborate with MACHINE-A?

Nick Knight (SHOWstudio): I find inspiration in shops that have created a community around them, such as Sex, Seditionaries and Biba. I was drawn to MACHINE-A as it embodies the same spirit.

What has changed that you decided to move into retail and that you’re so actively supporting young talents?

Nick Knight: It has been an introverted process, when we looked at SHOWstudio’s wealth of information and how it allows our customers to develop a meaningful understanding of the clothes they are wearing. You can check out the designers you are interested in, learn about their ideas, hear them speak and purchase a piece of their clothing. Education and retail have never been brought together like this. I think it is fascinating.

“IT’S AN EXTREMELY DIFFICULT AND COMPLICATED PROCESS FOR A RECENT GRADUATE TO PRODUCE HIGH QUALITY GARMENTS FOR REASONABLE PRICES STRAIGHT OUT OF UNIVERSITY, WITH NO ACCESS TO PRODUCTION FACILITIES AS ESTABLISHED BRANDS HAVE.” – STAVROS KARELIS

How did you select the designers for this project?

Stavros Karelis: There are many reasons behind this selection. Firstly, apart from the unquestionable talent of all these graduates, it is their unique vision; aesthetic; the different perspective, and fresh approach to fashion. Furthermore, we are looking for designers who are up for the challenge. It’s an extremely difficult and complicated process for a recent graduate to produce high quality garments for reasonable prices straight out of university, with no access to the production facilities that established brands have. These collections are going to be bought by customers, so they need to be made perfectly. The selection of designers proves that graduates can have both talent and business acumen.

Nick Knight: I would say that these designers that have just graduated have nothing holding them back. They’re not dealing with marketing and the reality of production and buyers so their vision is very pure and audacious. More mature designers might think about profit margins but young designers are still finding out what they want to do. That naive enthusiasm and courage is very exciting.

In which ways are the London-based designers different than the others?

Stavros Karelis: I don’t think there are any differences between London designers and others. A talent is a talent regardless of place of origin. Especially with all the social media and internet, designers have similar influences and access to a world-wide audience; key industry people, and retail stores. Moreover, many of them who are not based in London have studied here, so they have come across the vibe and the energy of the city, and know how to communicate their collections and connect themselves with the right audience.

“MY SIDE OF THE FILM ENDS WITH THESE KIDS PLAYING IN A CHILDREN’S PLAYGROUND AT NIGHT AND TO ME THAT REALLY REPRESENTS A TEEN-TO-ADULT TRANSITION.” – REI NADAL

What was the idea behind the video?

Nick Knight: There’s an interesting message in it — how fashion becomes disassociated from its own meaning. People look at it in magazines but they also look at it on the street. There’s an aspirational image that comes from a photographer’s studio but then there’s the actual wearing of it.

Rei Nadal: My intention was to make an honest film about youth today, particularly that phase between childhood and adulthood. I spent a whole day with these eight youngsters; I placed them in these three different scenarios and let them be themselves. My side of the film ends with these kids playing in a children’s playground at night and to me that really represents a teen-to-adult transition.

What is the definition of ‘youth’ to you beyond age?

Nick Knight: Youth is complex, and when I was young I was very complex. You still don’t know who you are so you try out lots of different roles and you try out being lots of different people. The age of those models in the film is very critical because it’s the age where you go from being a child to being an adult. That junction is very exciting but also very difficult for some people. It’s a rite of passage and I think it’s a very important time in people’s lives. I lived to try to find out who I was, I tried out lots of different situations and personas, and I was encouraged to do that by my parents. I never felt I was rebelling against them –  I felt like I was rebelling against everything.

Rei Nadal: I feel youth is very much a tragedy, as we all are losing ours by the minute. We idealize being young because we are all afraid of dying one day. I was an angry kid. I grew up in a small city and I was desperate to fly away from there. I am 25 now and I still can find that anger within me every now and then. I don’t think I want to lose it.

Stavros Karelis: It’s the energy, the vibe, the words, the way one acts, the way one moves, the music they listen to, the way they wear clothes, how easy they are about things, but also how strongly they believe in things that are important to them.

“I SUPPOSE THAT IN THE WAY THAT THE INTERNET CAN EXPOSE YOU, YOU CAN BURN OUT QUICKLY. THERE’S A DANGER OF VERY FAST OVER-EXPOSURE.” – NICK KNIGHT

In 2015, which advantages do young designers have when they want to make work that will be sold in stores and recognised by leading image makers, as opposed to when you just started out? And what’s become particularly more difficult for them?

Nick Knight: The advantage and huge change from when I first started out is the internet of course. To be able to communicate with your customer in such a global fashion, as we all know, is incredibly exciting and important, and that was something that could never be achieved. Before, you would have to go through a middle-man – now you can get straight through to your customer without having to jump through hoops. I think we’re going to move to a situation soon where there’s much more freedom for customers to go straight to the designers. It’s a slightly different procedure for image-makers, I’m more in touch with people because of the internet but normally the clothes come to me because I’m working with a stylist. I don’t know what would be harder now than 30 years ago. Things tend to advance. I suppose that in the way that the internet can expose you, you can burn out quickly. There’s a danger of very fast over-exposure, a danger of hyping somebody’s talent and then there’s the problem of designers doing collections that are immediately stolen by lower market stores. I generally tend to think the world advances and becomes better and better, not worse and worse.

What were some of the advices that you’ve given to the designers?

Looking back at the past few weeks, what have you personally learnt from this project?

Stavros Karelis: When you give an opportunity to young people to show their skills and talent, they will work extremely hard to prove themselves. I also learnt how to do stick-and-poke tattoos and give piercings to someone else.

All video and imagery courtesy of showstudio.com

The Visionary Nick Knight at Sarabande

The photographer talked collaboration, the possibilities of the internet, and what he really thinks of the fashion industry.

An exquisite corpse: a CSM Fashion and Jewellery collaboration

An outsider's take on the London Fashion Week.

A Closer Look at the Kering Sustainability Project

A look behind the scenes of Nike with Design Director Brett Holts and three young students involved in the collaboration.