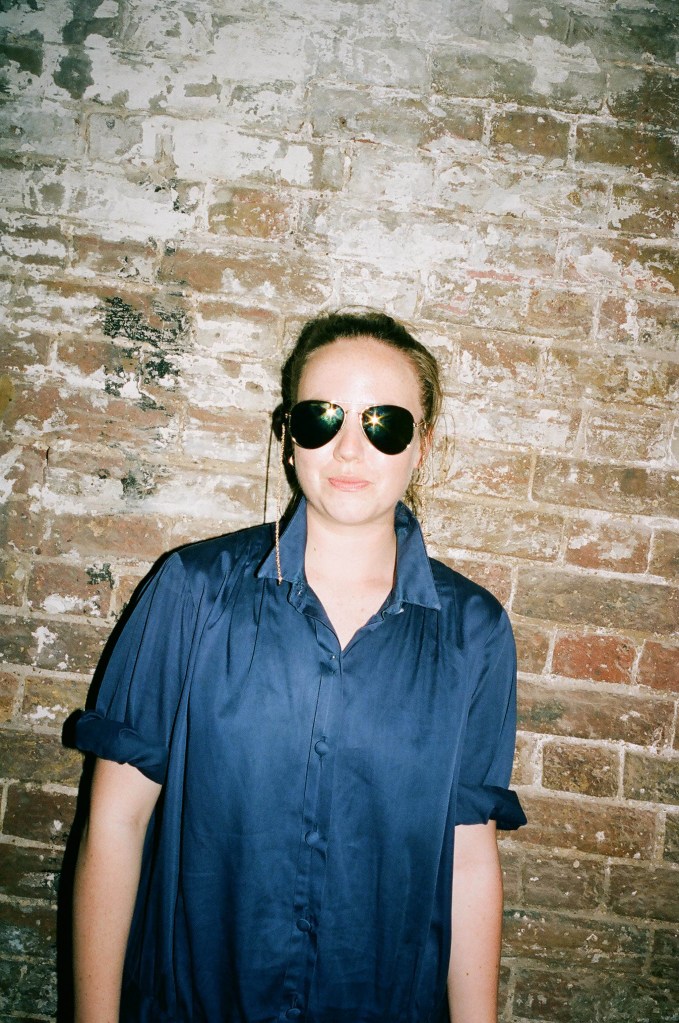 Erin Hawkes is the recent Central Saint Martins graduate and top prize winner for her playful collection where nuns seem to be disguised by wearing oversized workwear and hip hop menswear clothing that you can see worn on the streets by average guys. Undoubtedly, it takes talent to make religious nuns look cool in gangster hip hop clothing, and Erin is pure talent and a really fun person, wearing purple mascara, super sporty clothing and neon sneakers.

Tell us about your background and how did you get into Central Saint Martins?

When I was at school, I wanted to do a Foundation course, and one of my teachers was sure that I was ruining my life by doing something creative, but I did it anyway. I did it back at home because back then it was easier and I couldn’t afford to move to London. The first round I applied to Central Saint Martins, I did not get in, but I did an internship at Eley Kishimoto and moved to London. They ended up offering me a job, so I went there to work for a year… I worked for a whole academic year in between the Foundation year and the start of my BA course at CSM. I applied only to Womenswear Design pathway because I was always concerned with shape and volume…I have never been super textiles person or never considered doing print. I did some print for the collection, but that was it. It’s just that I have always been excited by volume, shape, and silhouette. So, that’s my simple story!

Describe these past few years at CSM? And how was your final year?

It seems like it has all gone by so quickly! It feels like two weeks have passed since I started, but at the same time, it feels like I have been here forever. At times, I was absolutely terrified about leaving, but it has been just really, really fun! I feel that on my first year I was quite separate from it; I didn’t come in and work at college that much. If I could go back, I would just spend more time here, more time with the people. My second year and especially, last year in the industry was so much fun because I hung out with loads of great people! Knowing how nice that was, made me enjoy this year more. I took more advantage of it and spent more time with the people. I guess when you are doing a final collection, you spend so much time around people and it is great if you get along, it’s just fun and social.

How was your sandwich year and what is the most valuable thing you learnt?

In the summer after my 2nd year, I worked a little bit for Danielle Scutt, she is a London based designer. Then, I went to Louis Vuitton and worked there in the accessories department for a whole year since September until pretty much the beginning of my final year, like two weeks before the start of the course. It was amazing!

It is so important to have really good friends, whose opinions you really respect because there is no one way of looking at a thing, there is no one way of doing something or there is no right taste or aesthetic… so, it is very valuable to have friends around, who have their own ways of looking, different tastes, but who you know that you can really, really trust and still appreciate their own take on things. Even if it helps you out to figure out that what you did in the first place is what you still want to do and even if you do not agree with them, it is still valuable to have people around, whom to bounce your idea to. That is the most important: to have amazing people around you.

Please tell us about your final collection.

All I wanted to do is something that I really liked. I tried to make it not too conceptual. I guess it was quite personal and I did so much research. I really enjoy doing research and I had so many photographs that I really liked…and there were quite a lot of nuns in there. Also, I looked at a lot of Balenciaga when he did tons of bibs and things, he looked into a lot of religious stuff, and I really love that kind of images. It is very beautiful, but also when you look at those things, it is quite menacing with those huge head bits covering their faces. It was a lot about the volume, about the shape. I thought about the ideas of the shapes that I really wanted to make, so I really wanted exaggerations of the way that people dress…you know, when you wear a jumper, it gets tucked up and creates this volume where the sleeve is… and I just wanted to do it in exaggeration. I love looking at people, so I wanted it to be about the clothes and the way people dress. I guess it was partly about that and of course, putting weird things together. You know, something fun and weird like when you look at someone wearing these weird shoes with long trousers, it is so nice to look at something fun with unusual proportions. I really wanted it to be about normal clothing like huge lumber jackets or 40 years old’s menswear, jeans and there was a lot of hip-hoppy stuff. So, I just wanted to exaggerate the normal clothes and make it grander. There are two different things that I really like: religious dress like in the old paintings, long gowns with big sleeves and low culture, hip-hop. If you think about it, it seems that religious dress is miles away from how an average guy on the streets dresses, but actually, some hip-hop loving boy from the streets of Brooklyn, wearing a massive t-shirt, is so close to wearing some huge religious robe. You don’t think that it is similar, but the proportions and the scale are the same to me. Both for me are so beautiful. And it all fits together and totally makes sense, all the bits that seem on the opposite sides of the spectrum, in my mind it all links.

What were the doubts during the whole process?

The shapes just developed. I did print because at some point I decided that I wanted some color in it, and I just wanted to have something really unexpected like a flash of color and something grand like one would see an entirely printed haute couture collection…I wanted something like that, but at the same time, something shitty like a cheap printed t-shirt or a tattoo: something low culture. I did that print and something for the internal show, but I did not show it. I thought, “Shit. It was just a waste of money and I don’t like it”, but then, I made one printed look over the weekend and I just loved it and it is my favorite! But I think things like that always happen because you get so close to your things and get so sick of it all because you keep looking at it for so long and think: “ What is the point?” You need some distance to look at it. There were a couple of things that I was unsure of… the print and those trousers that I made. They were so gross and disgusting that I thought that it might be genius, but then I wasn’t sure. And I still don’t know (Laughs) When you look at your work for so long, it is so hard. At the moment, I am quite happy with it, but who knows? Maybe I will look back in two months and think: “Oh God, how could I have done that!! How embarrassing!” (Laughs)

What would you advice to the soon to be final years?

Just have loads of fun. Enjoy because it is going to be over so quickly. And I do think that some people get really stressed out and take it all so serious. Seriously, it doesn’t have to be a serious thing. (Laughs) You get to do it only once, it is a luxury to spend a whole year doing what you want and love. Try not to be stressed out and just have the most fun possible!

What would you put into the survival kit?

Loads and loads of good music that you really love. Go out a lot and get hungover at least once a week because when you are hungover, you get a different perspective. (Laughs) You just have to chill out about things.

What did it feel like during the final show?

It’s all so surreal. You work so much on it, and then, suddenly, you are showing it to everyone, and then it is done. “Oh, shit. It’s over”, I thought. It just feels bizarre because you spent so much time doing it, and it is over like in two minutes.

The sad thing is that you don’t get to sit down and see the collections, I would have loved to just sit in the audience and watch the collections of my friends come out and just be happy for them. I think that everyone did so well.

What is on your playlist?

My gangster playlist during the collection just had a load of good stuff on it like Missy Elliot, Jay-Z, Kanye West, and Rihanna.

OMG, all we did was listen to KissFM!! It plays like 10 songs over and over again, every day! It is just such great music to work to. Even tho it is cheesy. That’s it, KissFM!

What do your parents think about your chosen career?

Well, my sister and I both did creative stuff. They don’t really mind, but  I think that they are a bit worried that we won’t be able to make any money and just starve on the streets probably. The other day, my mother told me that she actually quite likes it and that it gave her a bigger appreciation of clothing. I’m sure that they don’t mind as long as we are both happy.

What is for the future?

I’m handing in my portfolio next week. Then, I want to have a really amazing summer with my friends!!!

In three words, how would you describe your whole CSM experience?

Celia Pym is mending the human heart through knit

The Loewe prize finalist is teaching the world to think through objects.

Lidewij Edelkoort: “Fashion is dead, but maybe in the ashes we will find something new”

Predicting the future. It might sound like a bit of a dodgy career choice with associations of fortune tellers and astrology, but in fact it’s one that trend forecaster Lidewij Edelkoort has built a veritable empire out of.

Sandy Powell: Behind the Silver Screen

Meet Kate: the blue-fringed Knitwear student who modelled for Margiela