A look at the design process of the meticulous tailor 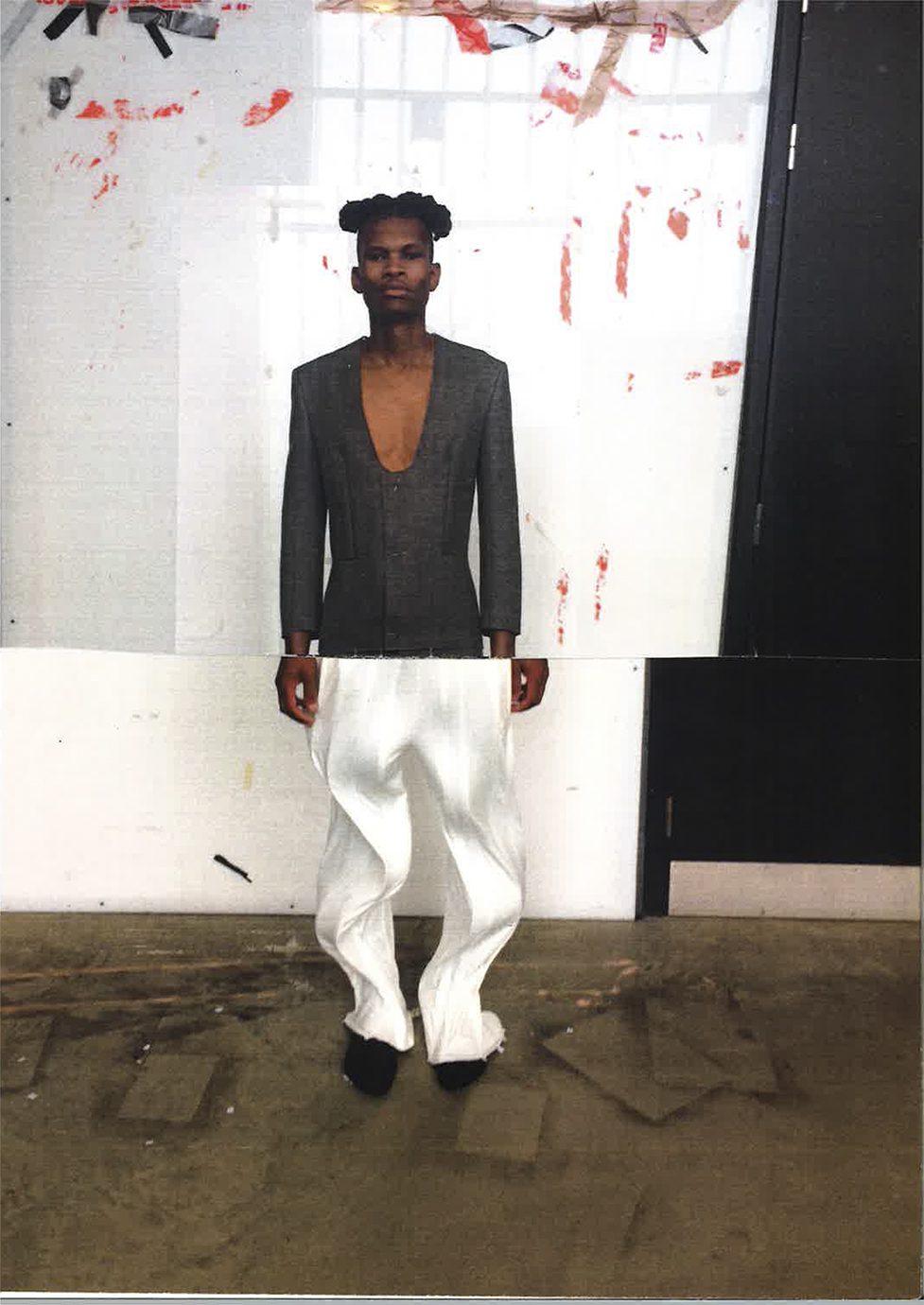 “I had never used a sewing machine before coming to Saint Martins,” Wallace confesses unabashedly. As an ambitious eighteen-year-old, he applied to Central Saint Martins’ BA program in Fashion Design with a portfolio containing a number of drawings on A1 paper and a black, latex-dipped string wrapped around a foot, which he boldly christened “a shoe.”

This is a far cry from where he is today. After completing his BA in womenswear, and shifting to menswear in the MA, the CSM thoroughbred went on to become one of the select few students to show his 10-look collection at London Fashion Week, and received the prestigious LVMH scholarship. During his eight years at the college, he developed an impressive background working at fashion heavy-hitters such as J.W. Anderson, Marchesa, Galliano and Freya Dalsjø.

Throughout his childhood, spent on Norfolk’s picturesque coast, Wallace built things, a trait he inherited from his father. “My dad is very… I don’t want to say DIY, because that sounds reductive… but he built a car when he was eighteen,” Wallace says, speaking with careful precision. “He’s always been extremely practical.” To this day, Wallace tinkers with materials and explores physical shapes by devising his own lamps and building chairs, tables, and other furniture. This exploration of product design has influenced the way he makes clothes – as a BA student he designed a wooden frame that would fit around a person’s body.

His understanding of 3D – both hard and soft – feeds into his designs: “I think I find the most interest in the shape of a garment, or its silhouette. I find that fabric gets in the way of me seeing this, if it’s overly printed or whatever. I’ve never liked anything because of the fabric, or because of what’s on the fabric,” he says. Looking past the dazzle or obtrusive color of a fabric, Wallace strives to find meaning in silhouette and form. His passion for making, his understanding of form in 3D, combined with his modest, quiet, thoughtful personality, make him a perfect modern craftsman; a 21st century heir to Gropius’ old ideal of an all-embracing work of art – a Gesamtkunstwerk – a foundation block of the Bauhaus school.

Wallace would have fit in perfectly among Gropius’ protégées, who were urged to delve into a wide variety of artistic and design media. Wallace even considered studying architecture after his foundation year in art, so it should be no surprise that his designs reflect the thin lines of the Hungarian-born Marcel Breuer or the self-taught French architect and designer Jean Prouvé.

Like these Modernists who reveled in calculated, controlled designs, Wallace seems to find comfort in problem-solving and constraints. He restricts himself to simple lines and understated textures to elicit an ideal truth. Wallace even says he enjoyed switching from womenswear to menswear before starting his MA: “I think there is a freedom in having those set of rules.”

In designing menswear, Wallace feels freer to give more weight to the utility and practicality of his creations, just as the Bauhaus architects did with their conscious awareness of flow, accessibility, and comfort. This focus has diminished Wallace’s satisfaction with the “runway experience” and he has lost interest in designing with the intent of putting on a show, as the runway doesn’t sufficiently display his collections’ interactive and practical qualities. “It was important to me that, with the tops and the trousers, you could switch them around, and obviously you can’t really read that on the runway,” he says.

Wallace realizes that the simplicity of his vision won’t get him any fast attention. But that’s not necessarily what Wallace is seeking. Modest almost to a fault, he is not seduced by the glamour or excess of fashion. He declined an invitation to a hip party thrown by a magazine during London Fashion Week: “Maybe I should have gone,” he says, “because that’s an amazing thing to go to and who knows who you’re going to meet. But at the same time, I really don’t want to be part of that thing at all. I don’t feel comfortable in that situation.”

There is a free-flowing air about him, and it leads one to think that he would be equally happy working in a renowned fashion house under his favourite creative director as he would be  working in a studio – slowly, simply and steadily designing and making lamps and pieces of fine furniture – somewhere amidst the enticing Norfolk Broads.

For Zhuoran Li, the body is a blank canvas

Intricate ruched surfaces and seductive silhouettes. The designer takes us through her self-reflective CSM MA collection.

18 months on from his bold MA presentation, the CSM graduate discusses his NYFW debut, his post-graduation experience in costume design, and life back in upstate New York.