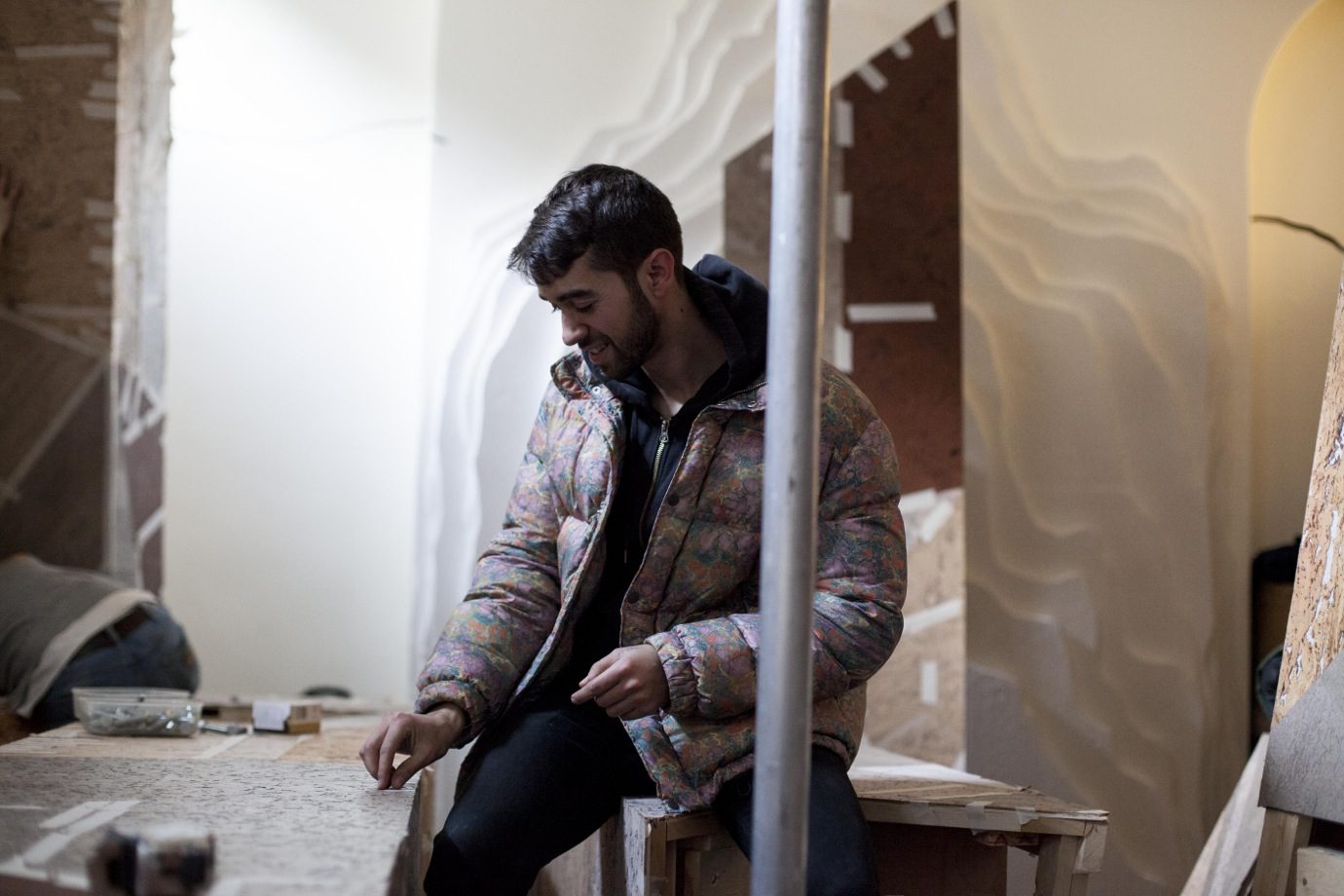 On the third day of London Fashion Week, the British Fashion Council awarded Miguel Bento with the best Set Design for their fifth annual International Fashion Showcase. The only problem? Bento was nowhere to be found. “I just didn’t think I was going to win anything,” he admits to us later that night. We are standing in Somerset House, outside of a room labeled Portugal, where five emerging Portuguese fashion designers have their sustainable garments on display as part of the IFS’s Fashion Utopias presentation. Bento has designed the set for his home country: a massive, multicolored cork structure that frames the entire room. We manage to snag him away from the crowd of people vying for his attention for a grand total of 10 minutes.

“THERE’S NO WASTE WITH CORK, BECAUSE YOU CAN ALWAYS COMPRESS IT AND MAKE NEW MATERIAL.”

The Portuguese born, London based set designer is certainly humble despite the whirlwind success he has enjoyed since graduating from Central Saint Martins in 2013. At only 25, his work has been featured in a range of magazine titles, including Vogue Hommes International, Dazed and Confused and Wallpaper*, and he has worked alongside a slew of renowned photographers: Laurence Ellis, Brett Lloyd and Frederik Heyman, just to name a few.

Bento got his start with the Performance Design course at CSM, where he did a mix of things related to stage setup. A fortunate internship with Gary Card, one of the hottest set designers in London, eventually led to a full time job. “That was the reason I ended up doing set design,” he explains. During his time with Card, Bento dabbled in everything, working alongside his boss from the start to finish of a brief. “Even the administrative stuff, which is actually really important even if you don’t realize it.” Bento took the skills he learned with Card and embarked on his own projects, which he had been evolving for some time. He now works entirely for himself, and has built quite a strong reputation in the set design community. Case in point was Sunday when the British Fashion Council created an award category specifically for him.

“THE INDUSTRY’S LACK OF SUSTAINABILITY IS DEFINITELY A WORRY ON PEOPLE’S MIND, ESPECIALLY FOR THE YOUNGER GENERATION.”

His phone buzzes for the third time during our conversation, his popularity bringing us back to the present moment and his current display for the IFS. The theme of sustainability runs throughout the multi-room exhibit, with 13 countries each exploring a utopian vision for fashion. Cork is Bento’s material of choice, and he has Amorim, world leader in cork production, sponsoring all of his design endeavors. “People see cork as only really used in wine bottles, just something to be thrown away,” Bento explains. By partnering with Amorim, he is reintroducing cork to the fashion industry as an acceptable sustainable material. “I wanted to mainly explore the waste that’s produced within fashion and in general. There’s no waste with cork, because you can always compress it and make new material.” He is not alone in advocating the benefits of the commonly overlooked material. Parisian fashion house, Chloé, constructed the entire runway out of cork for their Spring show, and sculptural cork wedged heels stood out amongst Chanel couture in January.

Amorim has allowed Bento complete freedom with his work, almost too much in his opinion. His only guidelines were to “just make something that’s really cool looking.” Cool is certainly one way to describe the massive stone-like structure that juts out at all sorts of angles into the gallery space; Brutalist is another. His transformation of the cork bears an uncanny resemblance to a heavy slab of Brutalist concrete, more at place within the Barbican Centre than in a fashion setting. Bento wanted to take the material out of its original context and show people “a different perspective on what can be done with cork.”

Once again, he is ahead of the curve with respect to his sustainable designs. As the fashion industry becomes more and more centered on immediate gratification, Bento has taken a step back and thought about other alternatives. The industry’s lack of sustainability is “definitely a worry on people’s mind, especially for the younger generation.” His face lights up as he further lists off the numerous beneficial qualities of cork, explaining how it’s created from the mere dust off a factory floor and harvested from the bark of the tree. He then shakes his head and laughs, still not confident with the interest being taken in his work. “I sound like such a geek, but I did kind of fall in love with it.”

Ben Doherty on the fallibility or vulnerability of an artwork

The Royal Academy Schools student on his worship-like art pieces, and how the institution helps furthering his work.

What is the future of fashion, Oriole Cullen?

Why doing something completely different than your course is OK