1 Granary Magazine – Issue 3 – Dazzling in an age of austerity 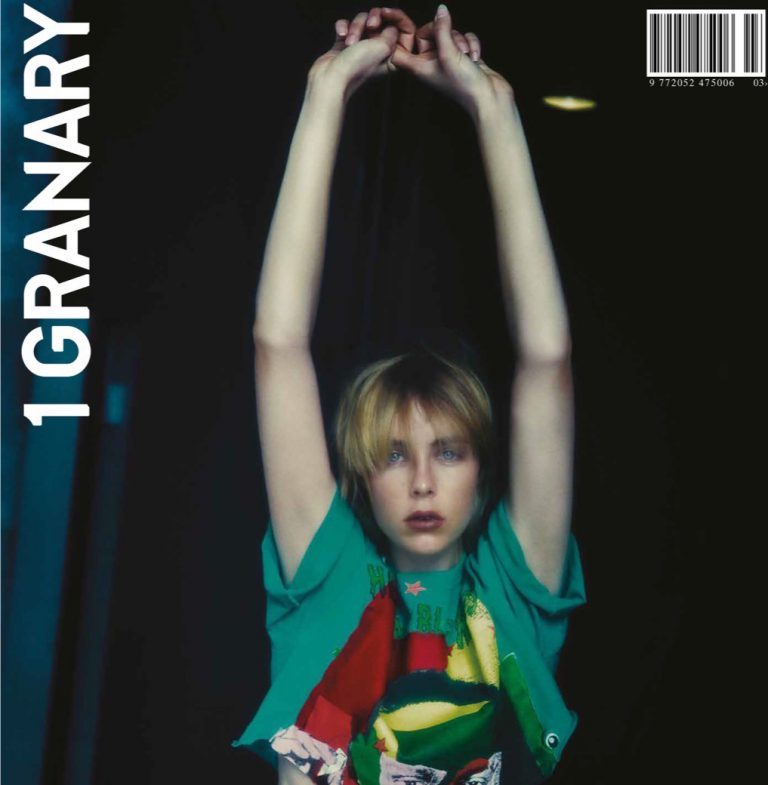 Delivering our third child might have been delayed a few months (first we’d release the magazine in May, then in July, then in August, now it’s September), but it was only because we wanted to give you the best content that we could possibly make. How could we not include this year’s BA graduates? How could we not include the advices of fashion’s finest business leaders, who could only meet us after our initial print deadline? We did not want to compromise. We wanted to bring peace and positivity in a time of warfare, political conflict, economic crisis, government change, environmental devastation… We did not want to put up with it or whine. So we decided to take action, and outshine all negativity.

ISSUE THREE IS FOR SALE ON OUR WEBSITE NOW. IT WILL HIT THE NEWSSTANDS AND OTHER SHOPS IN LONDON ON MONDAY 21 SEPTEMBER, AND WORLDWIDE NEXT WEEK. LIST OF ALL STOCKISTS COMING SOON.

In Dazzling in an age of austerity, we’ve featured the most promising talent from CSM’s Fine art, Fashion and Jewellery courses, alongside emerging designers like Richard Malone, Tigran Avetisyan and Rory Parnell-Mooney who have won the hearts of support platforms Fashion East and V-Files for their honesty and vision. Those features are not for the fainthearted, just for the record, the boys bite; they’re opinionated and rightly so. We spoke about porn with Simone Rocha, sipped champagne with Delphine Arnault (and saw one of CSM’s tutors systematically evading Kanye West the same night), listened to heartfelt stories of Thomas Tait who was on the verge of closing his brand before winning the first ever LVMH Prize, and similarly to those of Meadham Kirchhoff who can win awards for giving us the longest list of strong quotes about the reality of having a fashion house that doesn’t put its efforts in pleasing the industry. Adrian Joffe spoke with us over (uneaten) cookies and coffee about why those who know what’s cool aren’t the ones in charge, we cuddled with Lucian Freud’s whippet Eli while talking with his long-time friend David Dawson in the painter’s former house, we even nearly took a seat in Floriane de Saint Pierre’s shrink chair… We’ve gathered 240 pages of stories, opinions, and advices for the new generation, and learned dozens of invaluable lessons along the way.

We cannot express our gratitude for everyone who jumped on board to make the third issue reality. Here’s one for our family of contributors, friends, secret heroes, and the students of Central Saint Martins: the entire Team 1 Granary — this magazine would not exist without you.

“YOU HAVE TO KEEP IN MIND THAT YOU ONLY HAVE 60 SECONDS, AND YOU WORK TOWARDS THIS MOMENT FOR A YEAR.” – TIGRAN AVETISYAN

“YOU CANNOT CALL YOURSELF A CONTEMPORARY DESIGNER WITHOUT CONSIDERING THE WORLD AROUND YOU. HAVE SOME FUCKING DIGNITY. MAKE A DIFFERENCE.” – RICHARD MALONE

“YOUNG DESIGNERS OFTEN TRY TO CRAM IN A THOUSAND IDEAS WHEN THERE IS JUST ABOUT ONE IDEA THAT IS GENIUS.” – NICOMEDE TALAVERA

“GALLERIES ARE AS ANXIOUS ABOUT MISSING THE BOAT AS YOU ARE.” – RICHARD DEACON

“IF THERE WERE PAINTINGS HE FELT WERE NOT WORKING HE’D DESTROY THEM. HE WAS TOUGH ON HIMSELF.” – DAVID DAWSON ONLUCIAN FREUD

“I HATE IT WHEN THINGS LOOK FORCED, LIKE A STILL FROM A MOVIE. IT HAS TO FEEL NATURAL.” – LOTTA VOLKOVA

“WE DIDN’T FAIL BECAUSE WE’RE SO UN-COMMERCIAL; WE ARE NOT A VICTIM OF THE FASHION INDUSTRY.” – MEADHAM KIRCHHOFF

“THERE’S SOMETHING ATTRACTIVE ABOUT BEING CONSTANTLY POSITIVE ABOUT THE POTENTIAL OF THE NOT SO DISTANT FUTURE.” – THOMAS TAIT

“THE BUSINESSMAN CAN’T BE REALLY SUCCESSFUL UNLESS HE TRUSTS THE VISION OF THE DESIGNER.” – ADRIAN JOFFE

“THE MARKET IS CROWDED. CREATING ANOTHER LINE OF CLOTHES JUST BECAUSE DESIGNERS WANT TO PUT THEIR NAME ON IT IS NOT GOING TO WORK.” – ANDREW ROSEN

“I THINK THAT THERE IS NO EITHER YOU ARE A CREATIVE PERSON OR A BUSINESS PERSON: TODAY YOU NEED A CREATIVE THINKING MINDSET.” – FLORIANE DE SAINT PIERRE

“YOU SHOULDN’T BE TAKING MONEY FROM PEOPLE WITHOUT UNDERSTANDING WHAT THEIR EXPECTATIONS ARE.” – HUGH DEVLIN

The people we have asked to be featured in this issue have one thing in common: a need to question and challenge the increasingly destructive system we’re in. It’s essentially problem-solving in various forms, whether it’s identifying the gaps in the arts education system or the many obstacles that young designers and creatives are facing while trying to start small businesses.

Nobody more so than students have faced systematic injustice in the last few years. Never before has there been a time in which graduate unemployment was this high. Today, nearly half of recent graduates are in non-graduate roles within retail or office admin. The Guardian recently uncovered that the proportion of graduates failing to pay back student loans is increasing at such a rate that the Treasury is approaching the point at which it will get a ‘zero financial reward’ from the government’s decision to triple tuition fees to £9,000. If you think that’s bad enough, it’s only going to get worse.

It’s not just in London, either. But luckily, all around the world, plans of action are being put into place to help wriggle our way out of an out-dated system that is neither sustainable nor ethical. One of the ways in which we can begin to approach the problem is by considering it semantically. By sustainability, we don’t just mean improving things for the greater good of the ecosystem (although go ahead, by all means) but in terms of the environments of the industry in which millions of people work, study and aspire to be a part of. Everywhere from education to production to consumption, new ways of approaching sustainability should be on the agenda from the very beginning.

Did you know that there are 8,000 womenswear design students alone who graduate in the UK every year? Do they know there’s not a fraction of those jobs out there for them? And for those who want to start their own label, how many of them do you think have been taught about the business, the copious capabilities and economies of production or even just how they can develop new ideas in terms of business and communication that extend beyond aesthetic design and fabrication?

Beyond fashion design graduates, how many of those working within the industry are aware of the fact that the fashion industry, as only a piece of the complete system of production of commodities, is deeply unsustainable? It may be the relentless working hours without any pay for students; the 80-hour workweeks in a row without any days off whilst being deprived of their creativity as their employers produce more collections each year, transforming the design industry into an assembly line? Why is there so much pressure to stay in that established system and say nothing? Simultaneously, with the increase of speed and output, why does the quality of high-end products worsen every year?

We’re talking about the industry that is not only the second biggest polluter in the world after the oil industry, but is also causing the highest rates of mass suicides. 270,000 Indian cotton farmers have killed themselves in the past two decades, as documented in The True Cost, the highly important recent film by Andrew Morgan, which uncovers the many diseases present in our system and shows the serious implications of globalised capitalism that only benefits the few. Our economic system only measures in ‘value’ that which is traded, not a human economy or natural economy of the earth. Yes, we all know that fashion is a whopping £1.2 trillion industry (respectively worth £350 bn and £26 bn to US and UK) but after finding out how much of that money is due to poor treatment of human and material resources, it quickly sours and becomes rather disgusting.

Perhaps the answer lies in the generosity of those luxury giants and institutions investing their capital back into the schools and emerging talent that follow after them. Certainly the reinvestment of capital into funding small businesses, investing in scholarships and, less monetarily, providing young people with mentorship and opportunities to collaborate is what’s most important. A number of brands have already taken suit — from LVMH and their generous annual prize to the BFC’s recently announced Louise Wilson Memorial Fund. In working on this issue, we were astounded by the number of esteemed professionals who gave their time to working with us in the spirit of supporting young people and creatives. In doing so they gave us something much more valuable than money: skills and mentorship.

Change is already being made close to home in art colleges around the world. With Burak Cakmak, a catalyst for sustainable change in many high luxury houses, being appointed as Parsons’ new Dean this year, as well as the appointment of Zowie Broach, who notably urges her students to think outside of the established system, as the Head of Fashion at Royal College of Art, there remains optimism for the future. But, that’s not enough. As Burak Cakmak told us, only an evolution can happen within the established fashion houses, so it’s up to our generation to take the lead and revolutionise.

What do feminine creative spaces have in common?

CSM FCP students, Pie Sutithon and Deborah Wangsaputri on how they created Rubbertime Journal and the notion of relaxing

Hockin: revealing the beauty of construction